This vibrant Matcha Coquito Mocktail is a delicious dairy-free spin on the classic Puerto Rican drink, with a twist just in time for the holiday season.

This recipe was a reader request! Someone sent me a photo of a delicious matcha coquito they enjoyed, however it was neither vegan nor non-alcoholic, so I was inspired to create one that fit the bill. This version is creamy, sweet, and totally delicious (not to mention pretty!) 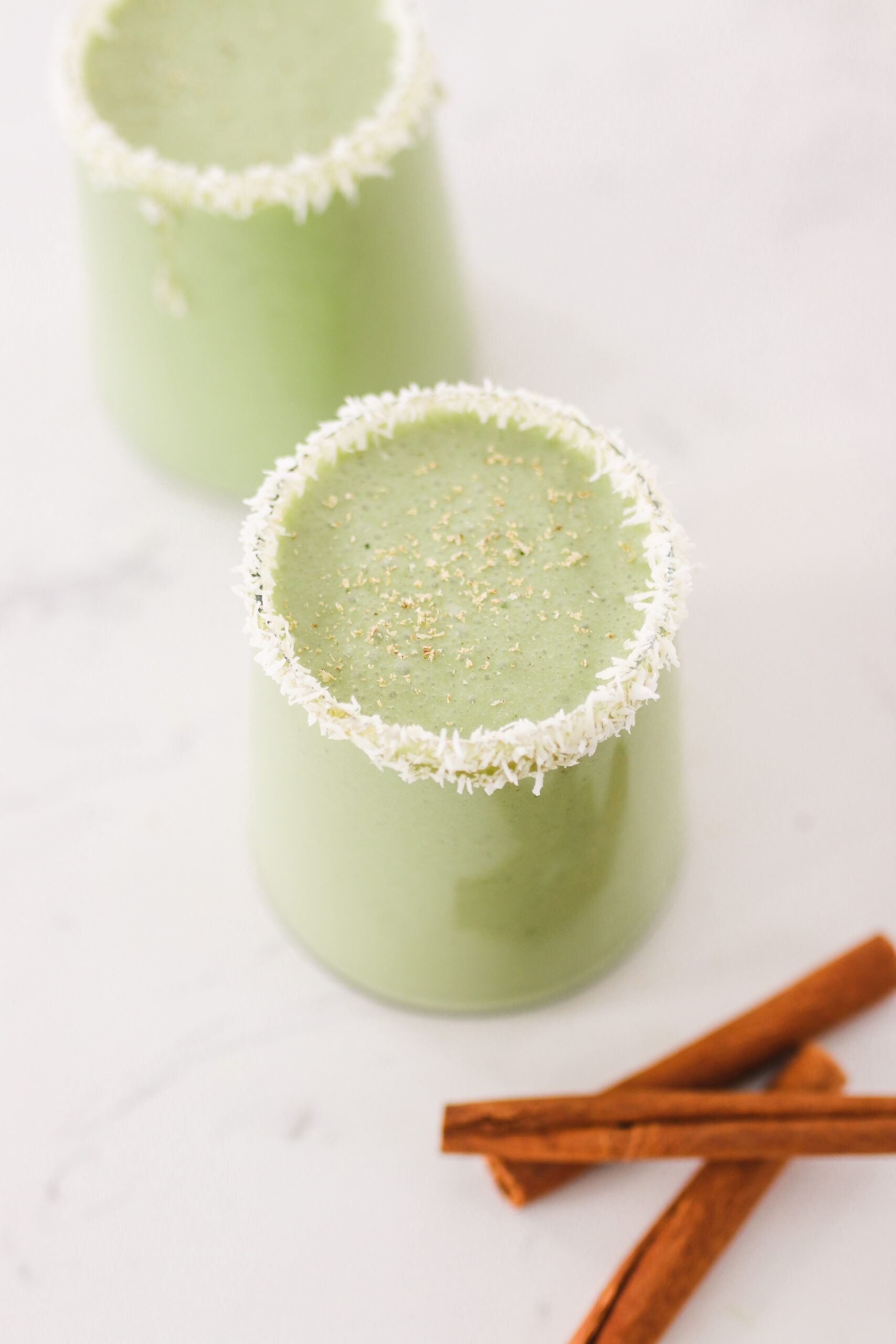 What is a Coquito?

A coquito is a rum-based Puerto Rican drink. It’s usually served for Christmas. It contains coconut and warming species like cinnamon and nutmeg, so it’s similar to eggnog. There are also various ways to make it. Some family recipes incorporate eggs, some are made thicker in texture. Traditionally however, coquito is made with both evaporated milk and sweetened with condensed milk so it does contain some dairy.

How to Make Coquito without Alcohol?

You can make alcohol-free coquito simply by skipping the rum. Or you can add an amazing non-alcoholic rum replacement for a more traditional flavour. I recommend Lyre’s brand of non-alcoholic rum. If you can get your hands on a rum alternative, I highly recommend it because it not only balances out the sweetness in the drink, but also adds lots of body to the flavour.

To start, I infused the non-alcoholic rum with cinnamon sticks, vanilla and raisins, as you would with traditional rum. Let it soak, remove the cinnamon stick and vanilla and once the remaining ingredients are blended, shake in the rum and raisin mixture to combine. 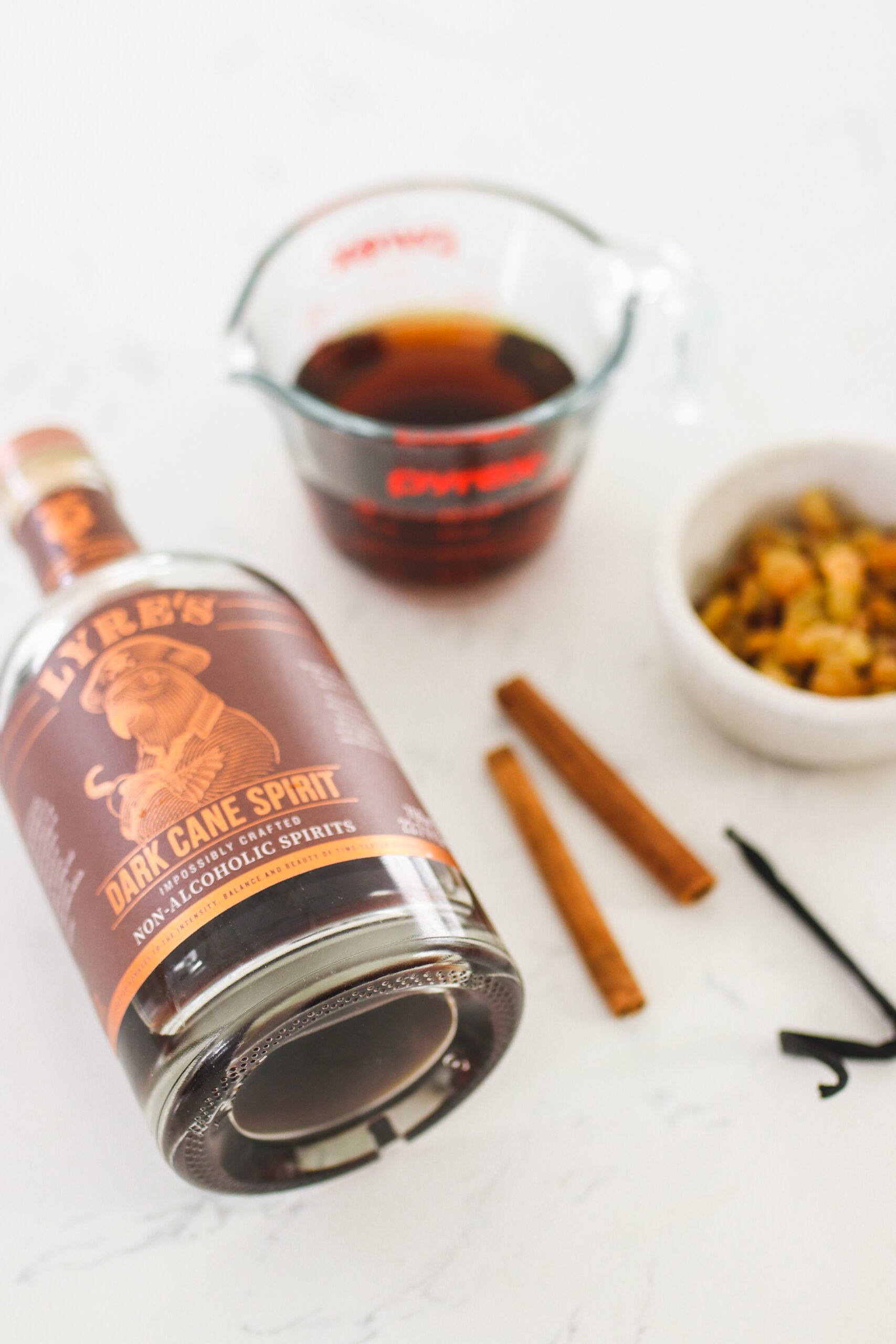 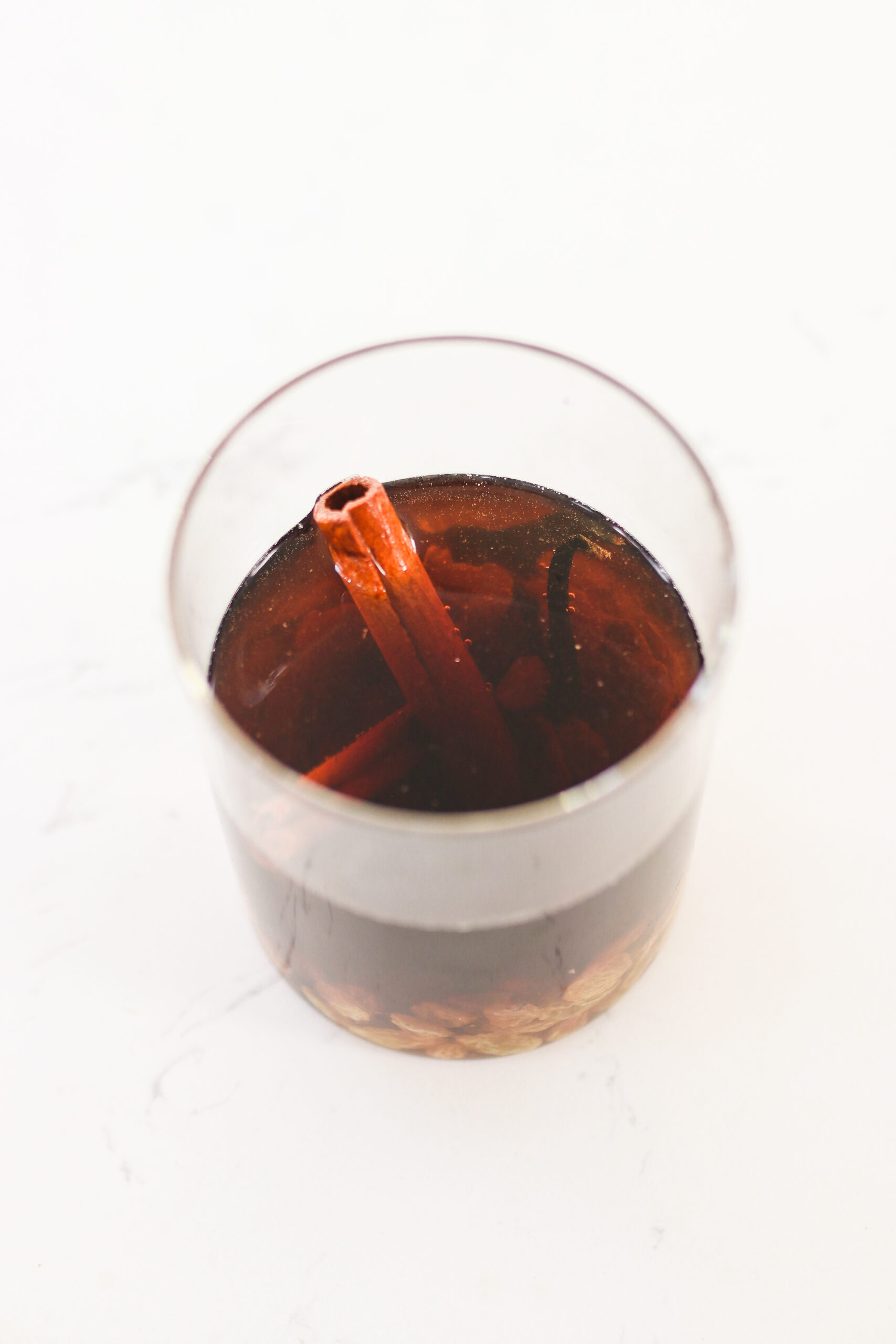 The traditional drink is very coconutty, so it is easily made vegan with a few modifications! Mainly, we’re replacing condensed milk and evaporated milk in order to make it dairy-free. I use sweetened coconut condensed milk and coconut cream. You get all the same richness without any dairy.

One distinct ingredient often used to coquito is cream of coconut. It is different from coconut cream or coconut milk. It’s a canned coconut based product that is sweetened, thicker in texture and usually contains fresh coconut meat. It can be difficult to find, so instead I included optional coconut meat as an addition to the recipe. Primarily it thickens up the drink but you can absolutely leave this ingredient out.

To prepare the base of the coquito drink, simply blend your coconut milk, coconut cream, condensed milk, fresh coconut meat and spices until smooth. To that mixture, we’ll then add the matcha. 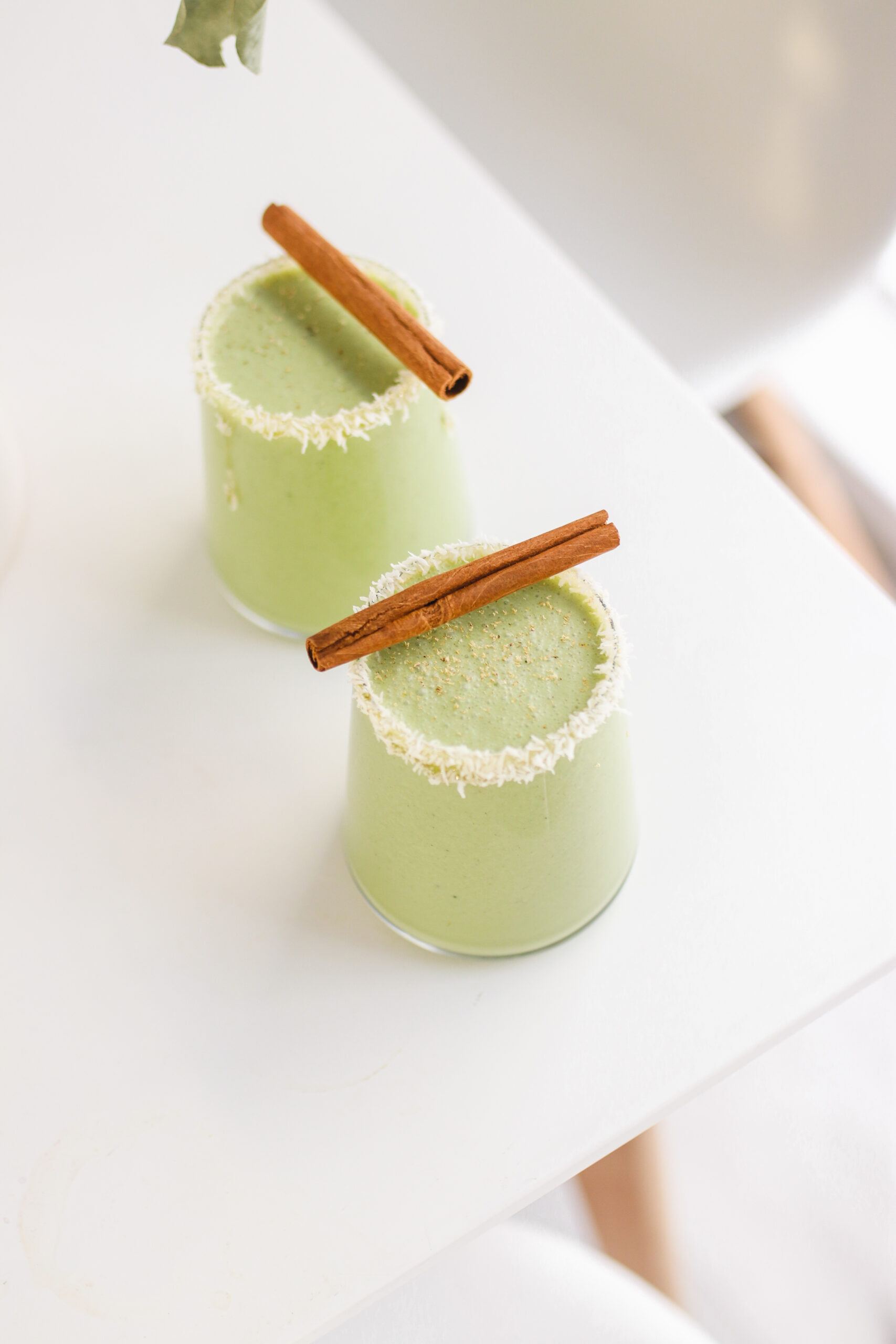 How to Make Matcha Coquito

Coquito cocktails are loaded with warming spices. And while matcha is definitely not a traditional addition to coquito, the flavours pair really beautifully. The creamy and rich coconut balances out the grassy bitterness of matcha.

The matcha also cuts through this sweet drink and the spices warm it all up and make it taste like dessert. If you don’t like matcha, you can leave it out but it is really a delicious twist! I recommend blending it in with your coconut base mixture, then transferring into a jar to chill until ready to serve. 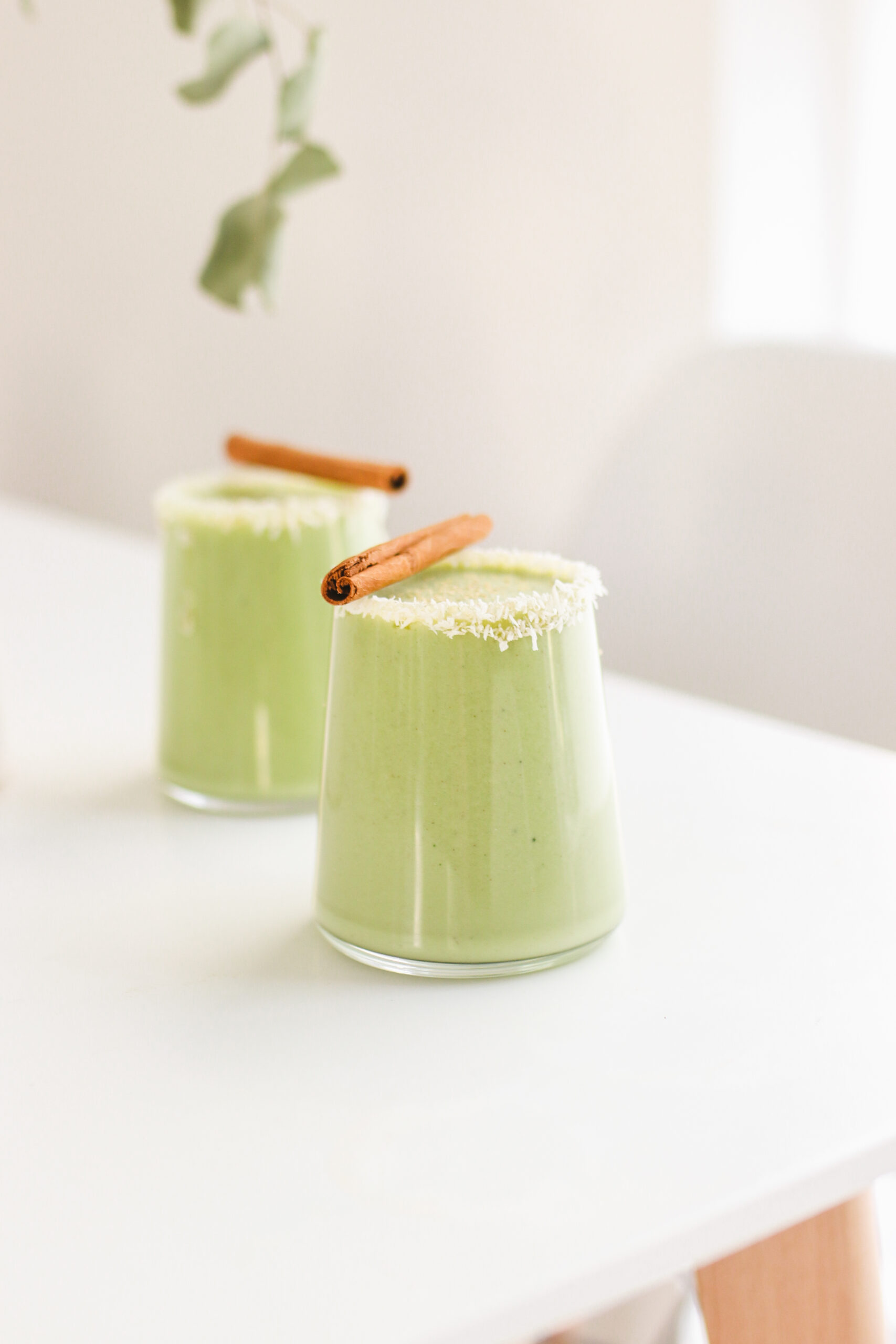 To serve, be sure to shake your mixture well. Separation is natural, and the mixture will be quite thick.

The fun part about this creamy mocktail is that you can add unique toppings. I like to garnish glasses of matcha coquito with rum infused raisins, shredded coconut, and a dusting of fresh matcha or nutmeg. 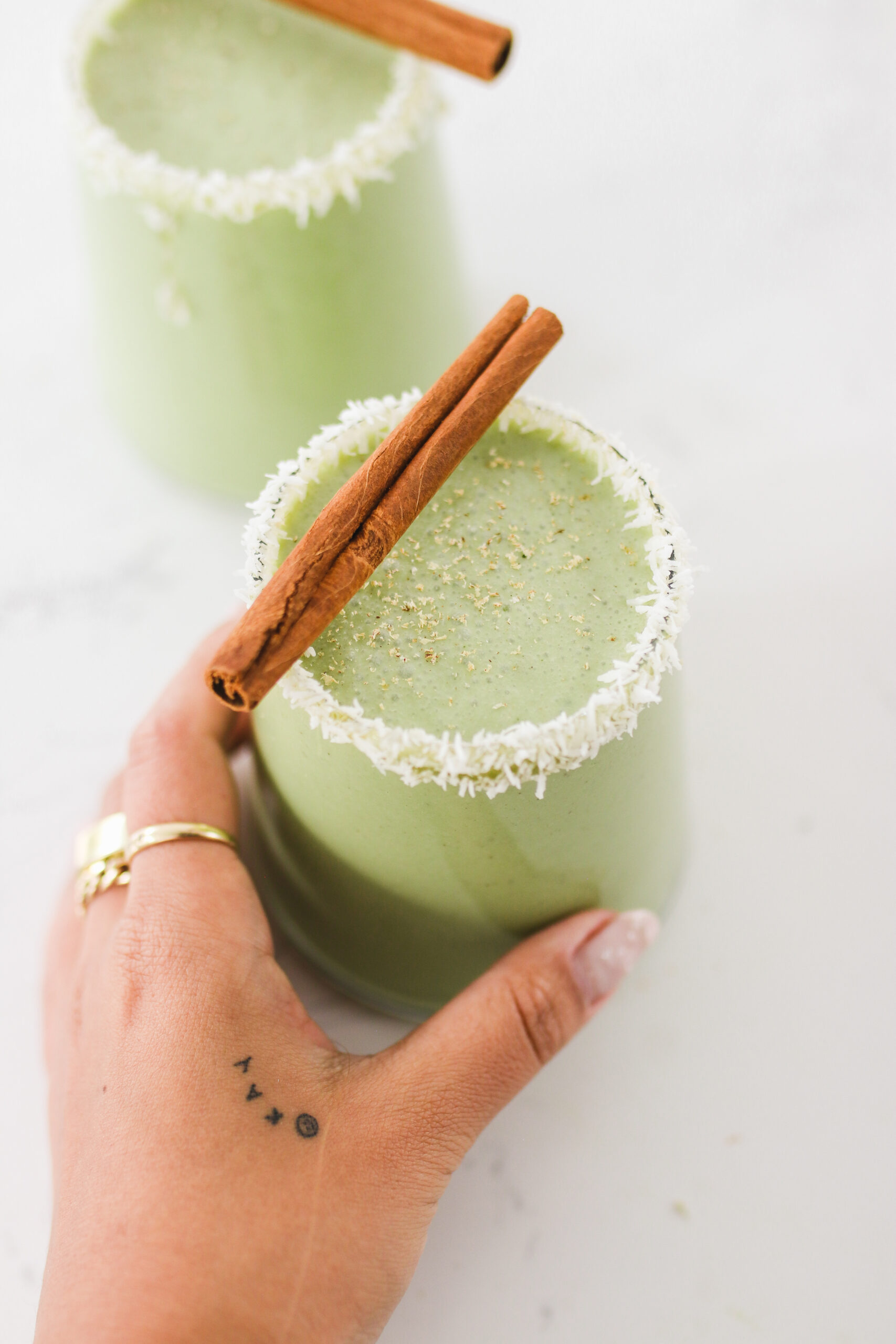 Try these other non-alcoholic sips next:

If you make this Matcha Coquito mocktail, let me know what you think with a comment below!