This simple Vegan Udon Soup recipe is an easy base recipe to make your own with a flavorful kombu-shiitake and leek stock, crunchy vegetables, and thick, chewy udon noodles.

There’s nothing like tucking into a piping hot bowl of homemade udon noodle soup. With the savory kelp broth, colorful vegetable toppings, and soft noodles, udon is both comfort food and health food. A win-win!

And if it sounds intimidating to make at home, I have good news for you: it’s easier than you think to make comforting, plant-based udon at home. This recipe includes a homemade broth, toppings, and chewy noodles with minimal effort. If you love my Vegan Dduk Guk: Korean Rice Cake Soup and Mushroom Zoodle Soup, then this recipe is for you. Enjoy! 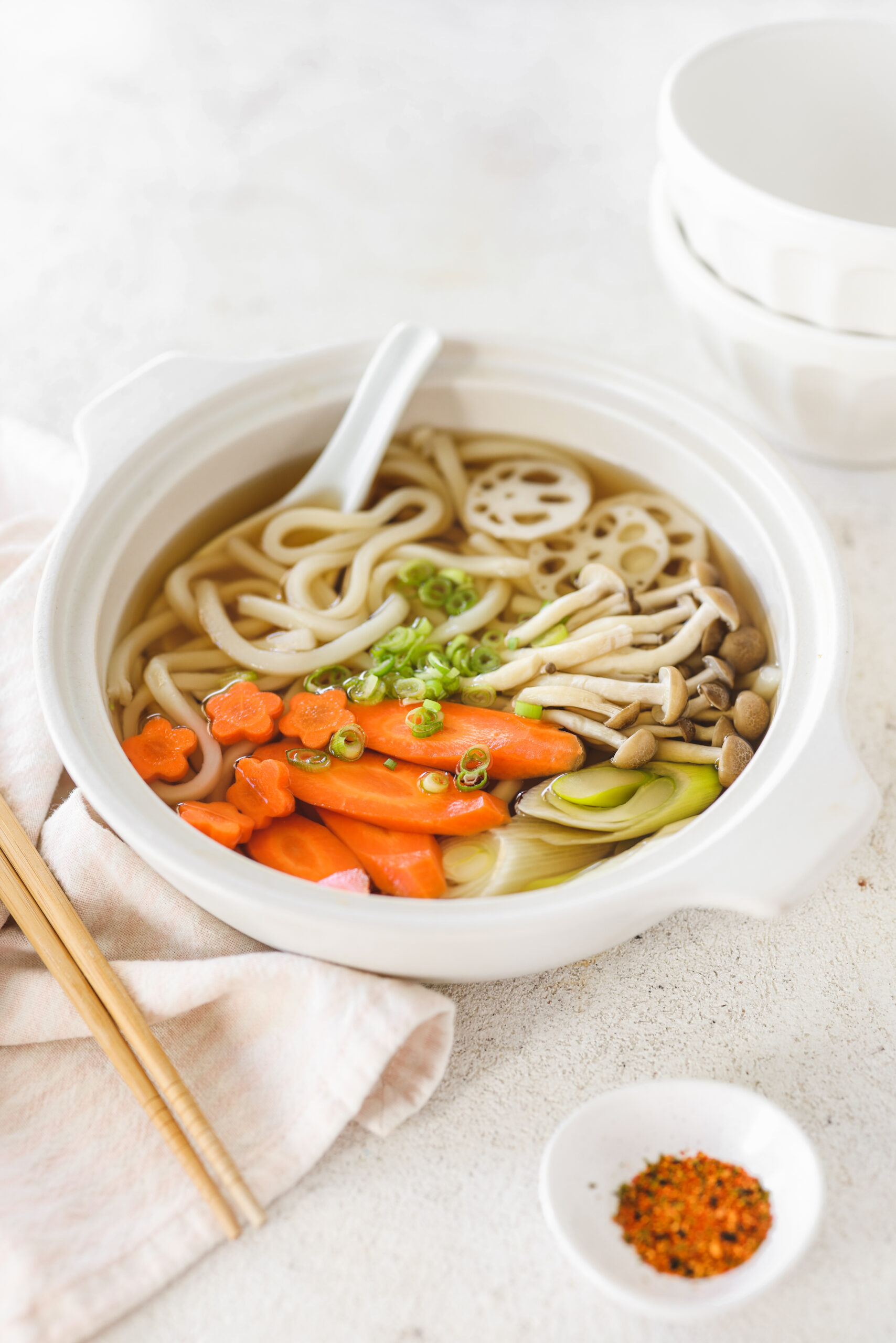 How to Make Vegan Udon

The most important step is to make the broth. Then, you simple soften up the veggies and noodles and combine everything in bowls to serve.

Note: Instead of cooking them directly in the broth, cook them in a separate pot of water. This way, they won’t overcook when you heat the broth, and the noodles won’t absorb all of your delicious broth. 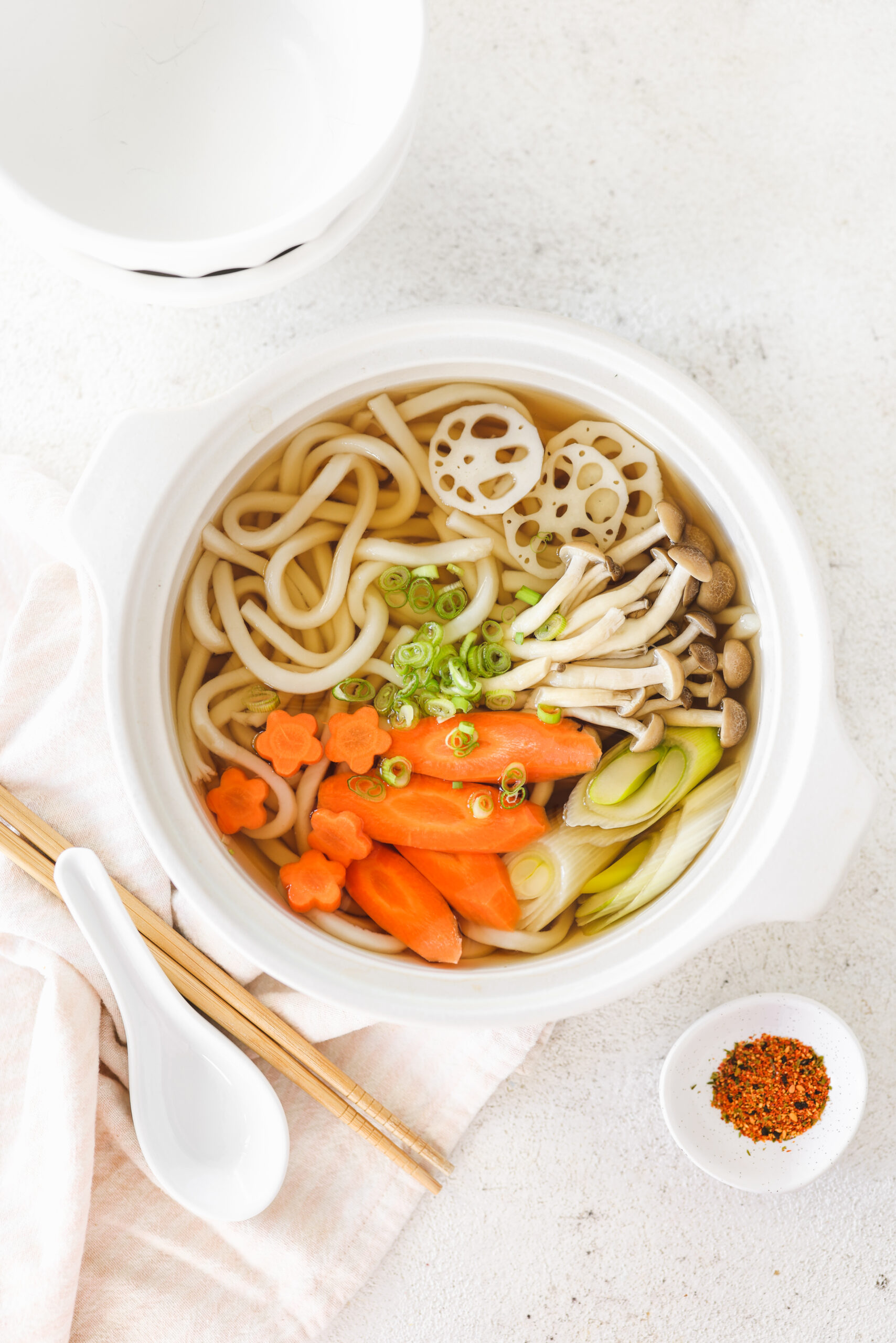 If making your own broth sounds like a lot of work, don’t worry. This vegan broth is much simpler and faster than bone broths. In fact, you can make the entire recipe, including soaking, in less than an hour.

However, if you have time, I recommend soaking the dried kombu and shiitake mushrooms overnight. They’ll give up a ton of flavor for your soup. In a pinch, a half-hour soak will do.

Then, to make the broth, bring everything to a simmer, remove the kombu and mushrooms, and season your stock with soy sauce, sugar, and rice vinegar.

Tip: You can easily make a big batch of stock and use it for healthy vegan soups and more. It freezes well too!

Kombu is actually a type of seaweed. It’s sold dried in sheets. Kombu a central ingredient in Japanese cooking because it’s the base of dashi. Dashi is a simple broth that’s served in soups, turned into sauces, and more in many Japanese recipes.

However, traditional dashi isn’t vegan because it’s made with bonito, which are dried fish flakes. That’s why I use dried shiitake mushrooms in this udon recipe to bring all of the umami goodness.

Udon noodles are typically not gluten free however you can swap out the noodles for 100% buckwheat soba, which is naturally gluten-free. There are some rice based gluten free udon noodles you can purchase but they are thinner and lack the same thick chewiness. As long as you use gluten-free noodles (and use gluten-free soy sauce or tamari), this recipe is celiac-friendly because the broth is gluten free.

You can use any fresh vegetables that you like in this soup recipe. I love the color combo of carrots, lotus root, mushrooms, and scallions. You can use any variety of mushrooms.

Other vegan udon toppings that work well include: