Growing up, Korean Rice Cake Soup, or Dduk Guk (떡국) was a classic comfort dish I ate frequently so I had to take a stab at making a Vegan Dduk Guk. Traditionally, the recipe is actually quite simple. It is made with a light broth of either anchovy or beef with chewy Korean rice cake, sliced egg and seaweed to top. It’s commonly enjoyed to celebrate the Korean New Year, but it’s also one of those dishes that my halmoni (Korean grandma) would whip up for me whenever I was in need of a simple, satisfying dish. 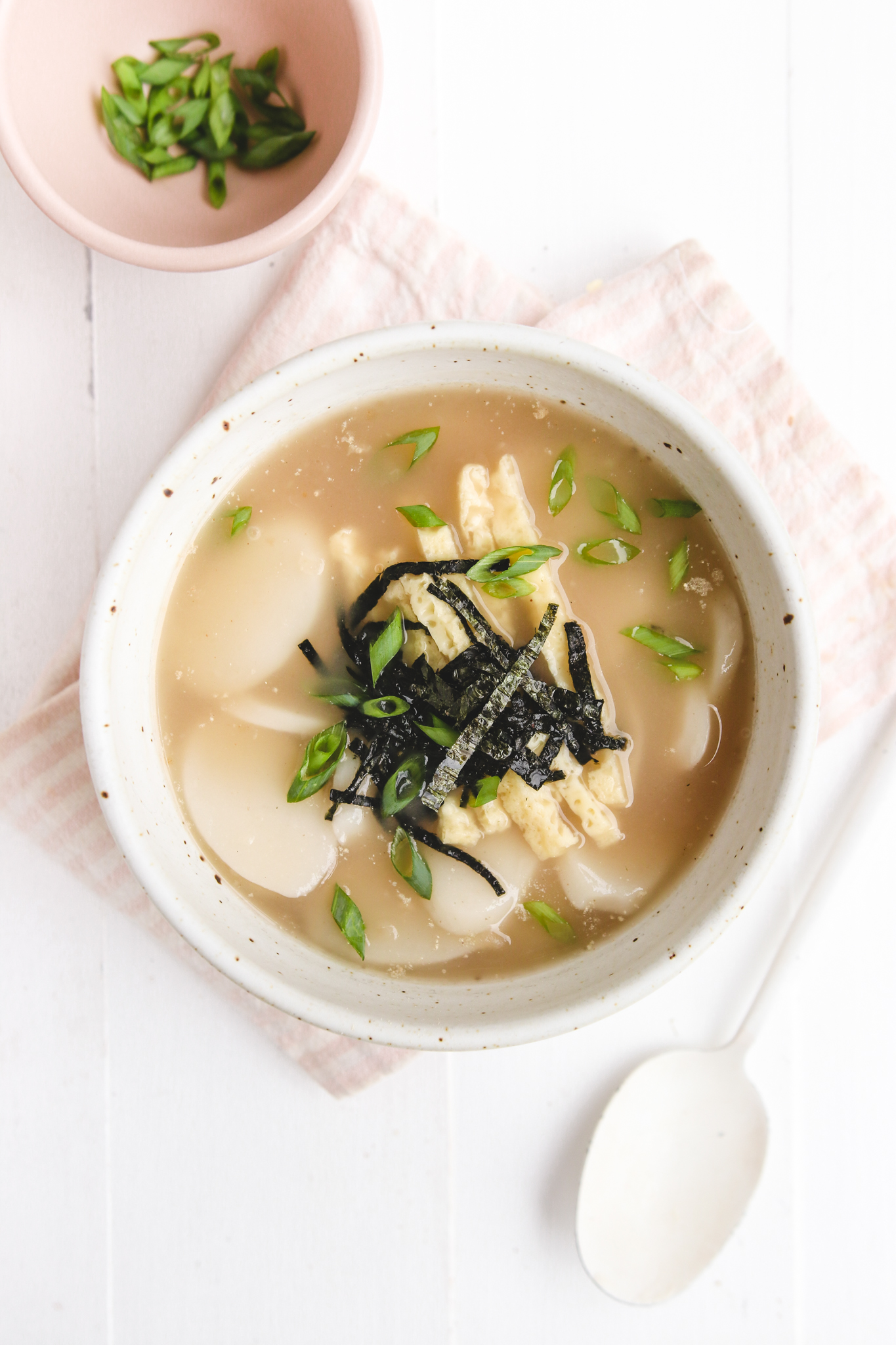 Making it vegan is actually quite simple! The only challenge is veganizing the broth, and to nail that, it’s important to create that umami, rich flavour. I substituted using sea vegetables and staple broth veggies like onions, garlic and green onion. These are also some of the most used ingredients in Korean cooking.

Now you know what I always say, when you’re re-creating a classic dish, you want to re-create the experience as a whole. That means garnishing it as you would the original and seasoning it the same way. Presentation isn’t that important, but most of us DO eat with our eyes first and I have to tell you, I think my vegan version looks pretty authentic!

Dduk guk recipes may vary slightly from Korean household to household, but today’s recipe was inspired by my halmoni’s traditional method. Feel free to tweak as you’d like, and let’s get into it! This Vegan Korean Rice Cake Soup recipe is vegan, gluten free, refined sugar free and oil free. 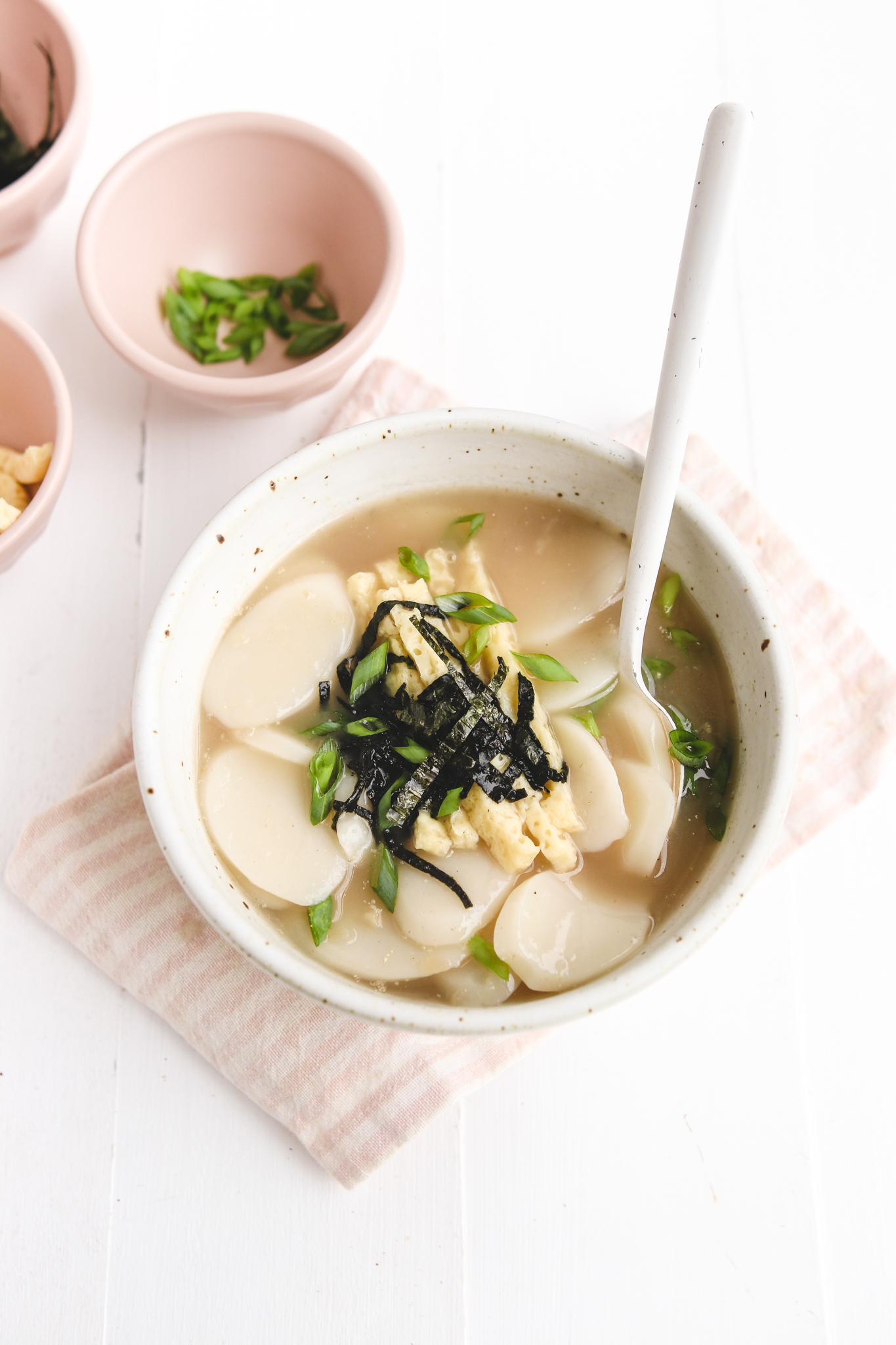 The most important element in this dish is the broth. Make sure you taste as you go, and adjust as you see fit. You can opt to use veggie broth to boost flavour, or stick to a pure homemade broth using the veggies listed below.

I recommend using sliced Korean rice cake, as this shape is predominantly used to make dduk guk. It will hold it’s shape even when prepared in soup, and cooks through nicely because it’s quite thin. How much you use is really up to you! Think of it like the “noodle” in your soup. You can find it online, or at your local Asian grocery store.

For best texture, it’s important to enjoy this dish right after preparing. You can store the broth if you have leftovers and add fresh rice cake when you’re ready to enjoy again. 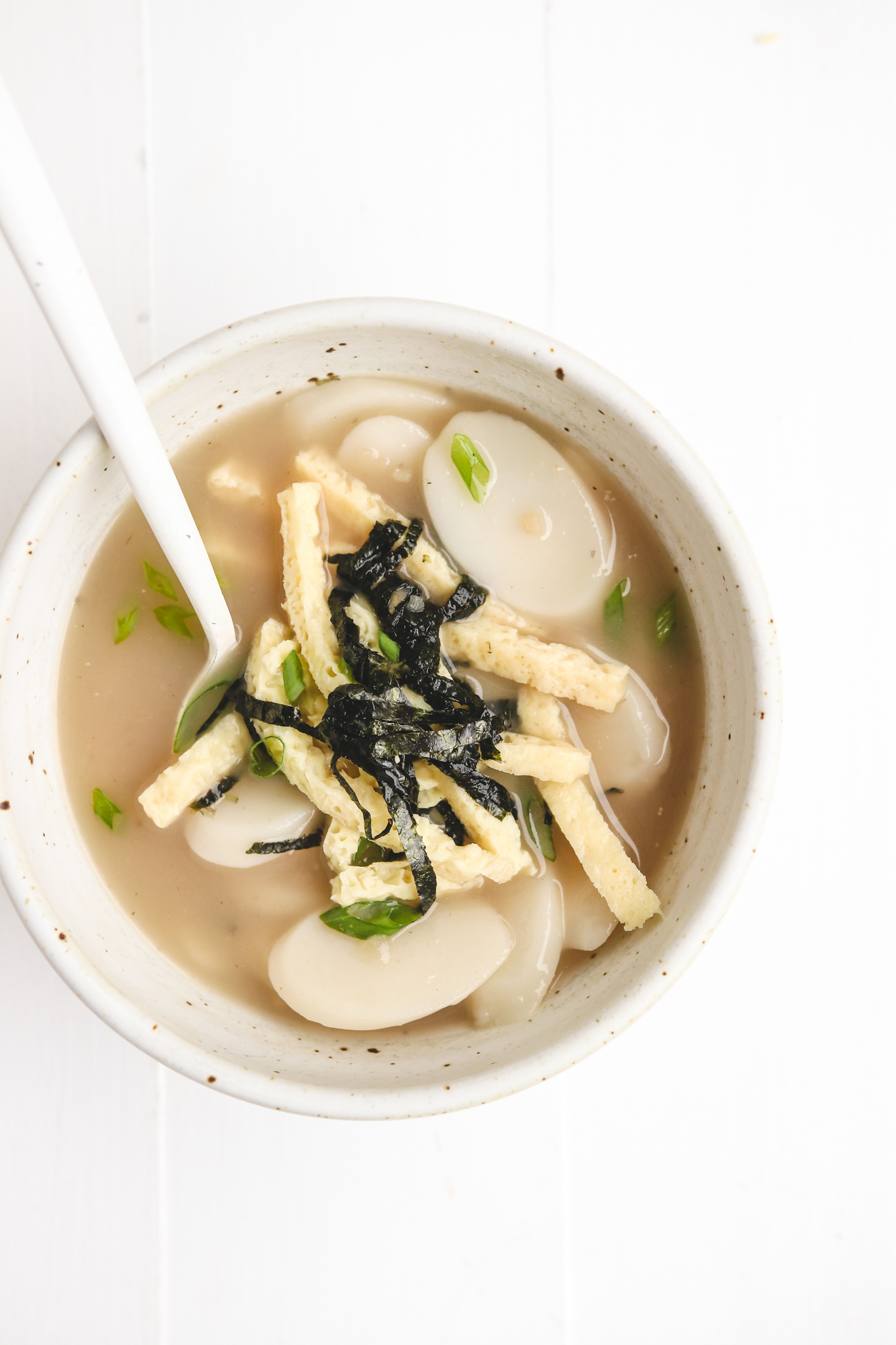 If you like this recipe, try these Asian dishes next!

If you try this recipe out, tag me on Instagram @veggiekins so I can see your delicious re-creations and feature them! As always, I love when you share your reviews in the comments below, and if you make any fun substitutions, let me know how it worked out below too.

pin it for later!