Hi Friends! If you follow me on Instagram, you’ll know that I was recently in Aruba on a press trip courtesy of Vegan Aruba, Aruba Tourism Authority and When In Aruba. Let me start off by saying that this trip was an incredible opportunity, and I’m so grateful to have been able to go and also grateful to see an official tourism authority supporting the vegan movement. Along with Sammy Grim, Brian Turner, Jasmine and Chris of Sweet Simple Vegan and Marina of Eco Goddess, we toured Aruba and sampled a TON of vegan options on the island.

Today I’m sharing a day by day of the restaurants and cafes we ate at along with some of the activities we enjoyed while on our trip. To summarize, Aruba is not only vegan friendly, but also gluten free friendly. Make sure you check out the vlogs on my YouTube channel to see all of the food and taste tests!

D A Y 1
We arrived on a rainy day (a rarity in Aruba, but great for the soil!), and checked into the Manchebo Beach Resort & Spa. I was the first to arrive, and spent the rest of the evening unpacking and settling in before dinner at Bucuti & Tara beach resort, right next door. We had a stunning first dinner at the Elements restaurant, with a special menu prepared just for our group and that meal was just the beginning of all the amazing food we ate on our trip. Of all the food I ate while in Aruba, I still can’t stop thinking about the Tempeh Satay with Peanut Sauce that was my main meal that evening. Elements is a sophisticated and elevated dining experience with a beautiful sunset view. I highly recommend going for dinner, and it’s a great option for mixed groups as they do serve non-vegan food as well. 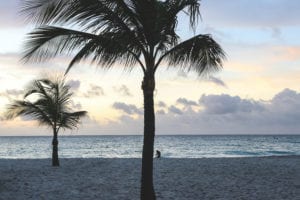 D A Y 2
The next morning we started the day with breakfast at Eduardo’s Beach Shack, a smoothie/cafe right on Eagle Beach serving smoothie bowls, Coco Whip soft serve, vegan and gluten free waffles, several quick bite options and an entire case of raw vegan desserts as well. They offer smoothies in pineapples, or coconut bowls (eco friendly!) and it was one of my favourite spots the entire trip. There were so many things I wanted to try, but I landed on the mermaid bowl–a mix of blue spirulina nice cream and pink pitaya nice cream served with fruit and granola in a pineapple as well as a vegan and gluten free waffle topped with coco whip soft serve. 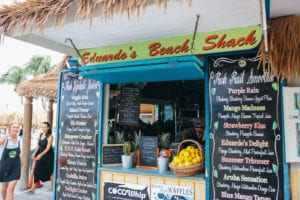 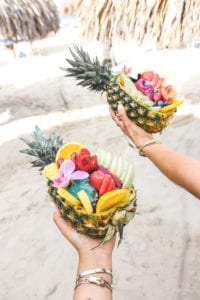 After breakfast, we walked further down Eagle Beach to our Stand Up Paddle Board (SUP) Yoga class with Island Yoga. I was the only one to fall off the board while trying to vlog the experience (#influencerproblems), but it was such a calming experience. 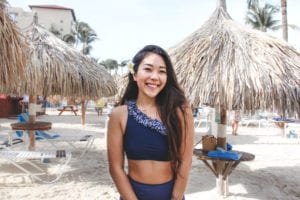 For lunch we headed to Nourish Cafe, located alongside Island Yoga which, by the way, is Yoga Girl’s studio! I ordered the tofu scramble, and popular orders included the island burger and the wrap. Nourish Cafe is a great casual spot for light bites after a yoga class and the outdoor seating area is absolutely stunning. 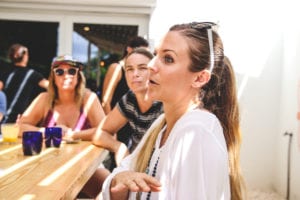 With full bellies, we headed to the Ritz Carlton Aruba for a complete aloe experience. We started by learning to make aloe drinks and ended with an aloe experience at the spa, with full body massages, facials and some lounge time in the sauna. 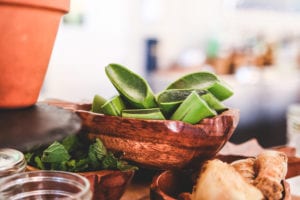 After freshening up back at the resort, we ended the day with a cocktail reception at the hotel with the vegan community in Aruba and enjoyed what might be the best vegan sushi I’ve ever had, courtesy of Omakase Sushi Bar (located at Manchebo). We also had a gigantic vegan paella complete with vegan seafood, prepared for us by Chef Sandro. 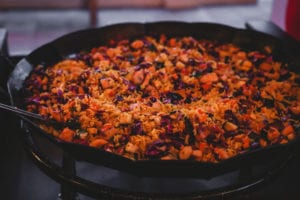 The night ended with even more vegan food at Ike’s Bistro (also located at Manchebo) and a full vegan menu. I can’t remember exactly what I ordered but I will say the appetizers were unreal and I vividly remember the “snickers” bar we ended with. YUM. We had an incredible cheese platter with something like a nacho cheese and a cream cheese that was out of this world. Needless to say, Manchebo and its eateries are VERY vegan friendly. 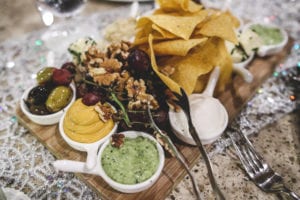 D A Y 3
The following morning, I actually woke up nauseous, most likely because of the sheer quantity of food that I had eaten. I took a breather and passed on breakfast, but Ike’s Bistro is launching a new vegan breakfast plate which was featured at breakfast that morning.

Right after breakfast we headed to Eagle Beach once again to hop on a sailboat with Montforte Luxury Cruise. We went to the Spanish Lagoon, snorkeled around the reef, and had an amazing spread of vegan food out the whole time, including a vegan chocolate fondue fountain! We swam, ziplined and Brian shot stunning drone footage (as seen in the vlog). 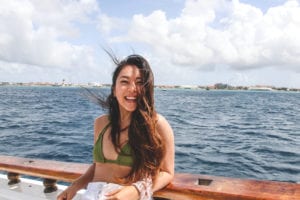 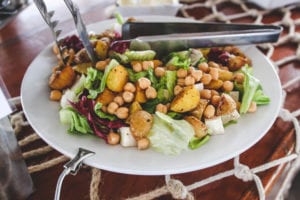 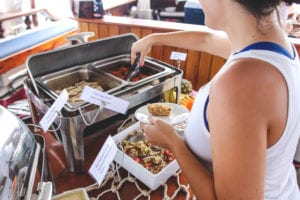 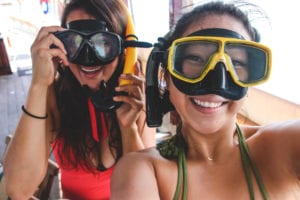 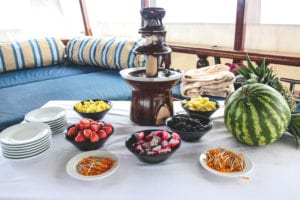 After the day at sea, we hopped onto a party bus with Kukoo Kunuku for a vegan food tour, making 4 different stops to try out vegan menu items at restaurants around the island. 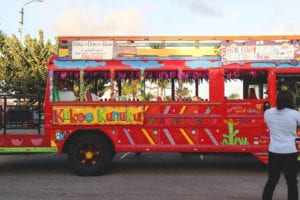 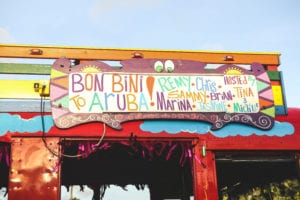 Stop 1: Faro Blanco Restaurant, where we had a killer Italian vegan meal and watched a beautiful sunset behind the iconic lighthouse on the island. It’s a very classy restaurant with a view, and would be a perfect date spot! 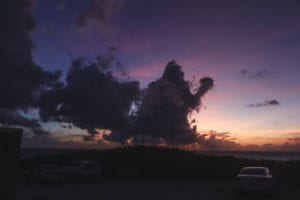 Stop 2: White Modern Cuisine, where we had a fine dining experience and the most beautiful iteration of corn chowder. This restaurant is a great spot for really elevated fine dining. 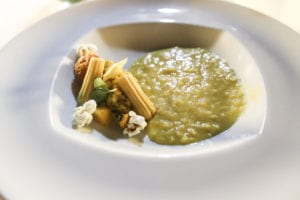 Stop 3: Hadicurari, where we sampled a vegan fish that tasted almost too real! Live music, casual ambiance and easy food. 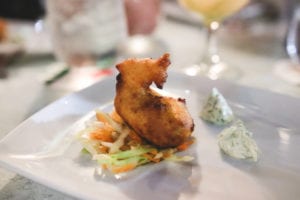 Stop 4: Yemanja Woodfired Grill, where we tried a spare rib and mac and cheese plate (the gluten free option was a creamy, delicious risotto).

Day 4 started with yoga on an uneven, surfboard like surface, or terra wave yoga right at the Manchebo resort.

We refueled with breakfast at Taste of Belgium, launching a brand new vegan menu and I loved the gluten-free french toast! It’s a cute little restaurant great for brunch with lots of waffle options for vegans and non-vegans alike.

Right after breakfast we headed on our Jeep tour with De Palm Tours with stops to the Donkey Sanctuary, and Arikok National Park. We met up with The Little One, which is a traveling drink/photobooth vehicle and enjoyed drinks served in pineapples and got to see a little bit of  San Nicolas. Finally, we visited the gold mine ruins and went back to the resort to freshen up before our final dinner together. 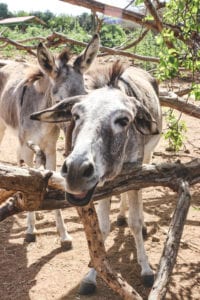 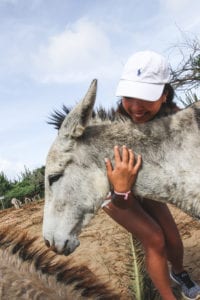 On our last night, we ate at the Sunset Grille at the Hilton, where chef Matt Boland prepared an amazing vegan menu. The standouts for me were the pumpkin soup, served in a cactus bowl and the dessert, which was a banana based, cacao mousse (sugar free!). 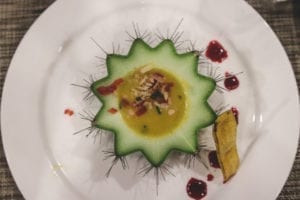 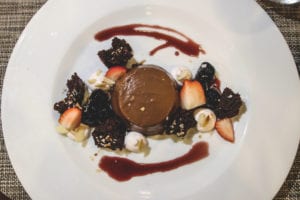 Before we headed to the airport, we had time for one last meal together and we had the opportunity to try out One Happy Bowl before it opened to the public. We had a savoury pancake bowl with veggie stir fry and avocado, followed by a sweet pancake roll filled with coconut and pandan. They call it the flamingo pancake. The entire restaurant is gluten-free, and it’s probably the most instagrammable restaurant on the island (that we visited at least!). 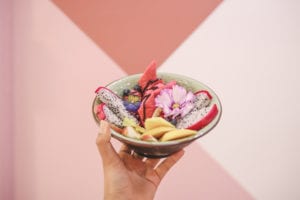 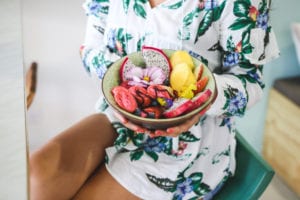 At the actual airport, I also noticed a Freshii, which has multiple vegan options, and lots of vegetarian options that can be made vegan.

I headed home, slightly more tan and a lot more full and the verdict is Aruba is not only vegan friendly, but deliciously so. The best part is we barely scratched the surface of vegan restaurants and options on the island! I received a bunch of messages from you all about your favourite spots on Aruba, and Meredith’s website has a pretty extensive list.

Have you been to Aruba? If not, I’d highly recommend it as a destination for sunshine, culture and damn good vegan food.

To stay up to date and for more vegan details on Aruba, head to Vegan Aruba.

CHECK OUT THE VLOG HERE

Where to Find Vegan Food in Aruba | Healthy Travel Guide 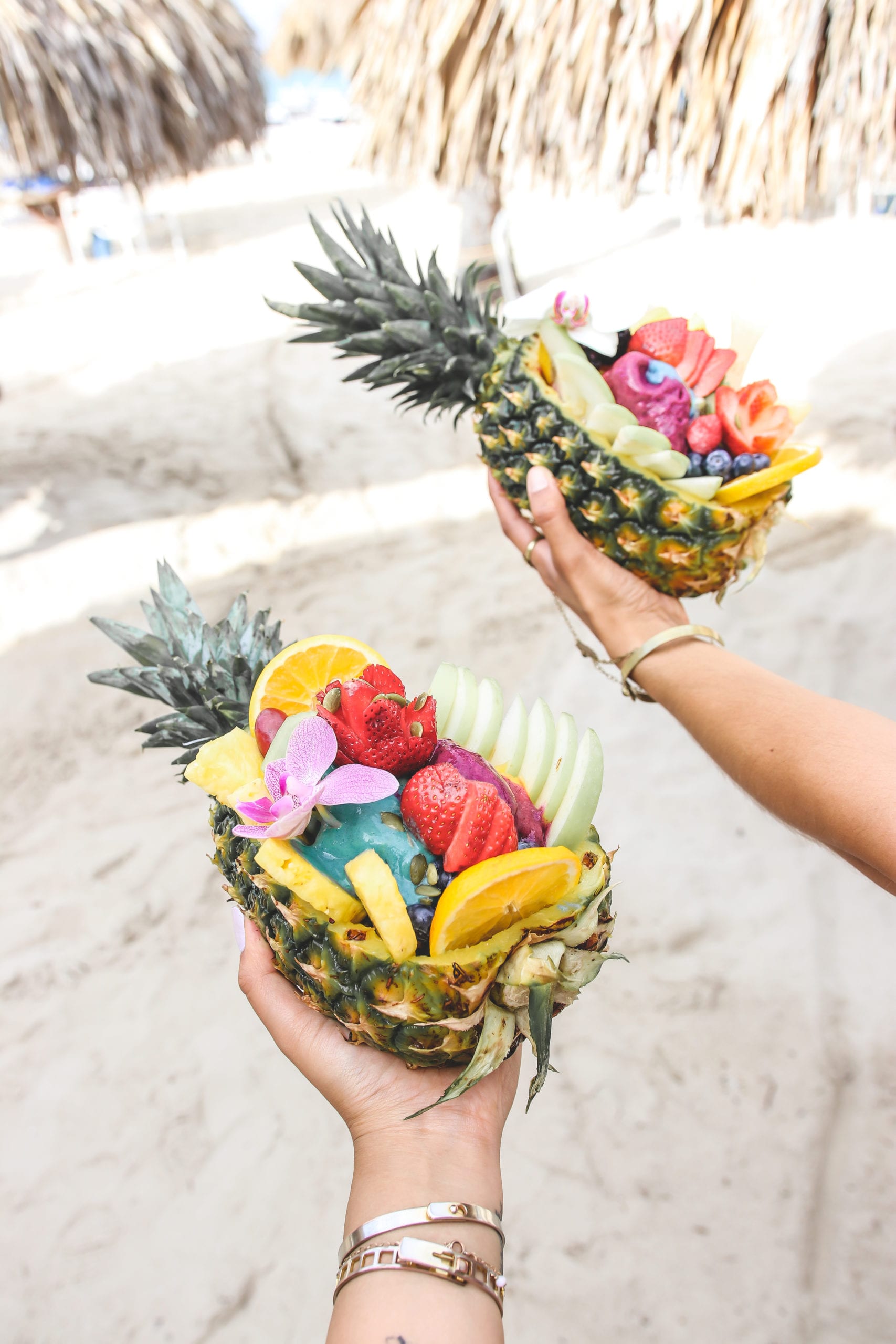