As you know, I am Asian, and while my family is very culturally American, I’ve spent the majority of my childhood growing up overseas in Eastern Asia. I’ve been exposed to a variety of Asian ingredients, and was raised eating things I thought were normal, common foods. In the last few years, and since starting my wellness journey however, it has been fascinating to see more Western acceptance and adoption of Eastern healing practices (and with that, ingredients as well).

I have conflicted feelings sometimes seeing foods that I’ve eaten and have been told are “weird” or “gross” turn into highly praised and newly discovered superfoods and cupping and guasha become trendy practices. On the other hand, I’m grateful that many healing practices and underrated ingredients are now receiving the attention they deserve. That’s an internal dialogue that occupies my thoughts constantly, and a thought for another time…. but in the spirit of Chinese New Year, and embracing Asian culture, I wanted to share 10 underrated Asian superfoods with you. Ok, some of these aren’t all that underrated anymore.

A few disclaimers before we dive in–I consider a nutrient rich, health beneficial ingredient a superfood. In reality, the concept of a “superfood’ really originated from a marketing strategy (google bananas + the superfood origin if you’re curious about that), and I want to also remind you that most vibrant plants are superfoods in themselves. Blueberries, spinach and even apples are superfoods, packed with nourishing nutrients just as much as an adaptogenic, probiotic, grain free item.

I’ll be using the term Asia/Asian and including India. I know some prefer to differentiate between India and Asia, but I will be including India whenever I mention Asia in this blogpost.

Finally, some of these ingredients are very potent, and can have significant effects on your body. Be sure to check with a doctor or nutritionist before implementing them into your diet, because if you suffer from any specific health conditions, these superfoods may not be super for you.


Ginger is a spice that originated in Southeast Asia, and was used medicinally by the Indian and ancient Chinese. It is a warming spice, that may aid digestion, combat inflammation and support immunity. It is also delicious both in sweet and savoury dishes. Ginger is regarded as a very healing spice in Traditional Chinese Medicine and Ayurveda, and is also very healing and potent in essential oil form.

You probably thought that matcha originated in Japan, because it is consumed so frequently there but it actually originates from Ancient China. Ceremonial matcha was actually a Zen Buddhist ritual, which was then brought to Japan. It’s not only delicious, and packed with antioxidants, but it is actually an integral part of traditional Japanese tea ceremonies. You’re likely no stranger to matcha if you follow me and/or watch my stories because I’m constantly adding matcha into my recipes, or straight up drinking it in the mornings. If you like matcha or want to try it in a recipe, check out this Matcha Bubble Tea, Matcha Vanilla Oatmeal or these Matcha Quinoa Bliss Balls.

While the origin of Turmeric is still hotly debated, it may have originated from Southern Asia. Which region in Asia is still unconfirmed, but Asia nonetheless. Turmeric is most commonly found in ground powder form, and also can be consumed or used in cooking from fresh root form. They look like tiny ginger pieces, sort of worm like if we’re being honest, and very bright orange in colour. Curcumin, found in turmeric, is known for its anti inflammatory properties, but may also support digestion, immunity and may have an analgesic effect. It is a staple spice/herb in India and highly regarded in Ayurvedic Medicine. India produces the majority of turmeric today and while I don’t love the spicy/bitter taste of turmeric alone, I do love the health benefits. If you’re in the same boat, and want to consume turmeric but don’t love the flavour, check out my Golden Cacao Latte (AKA turmeric latte for people who don’t like turmeric).

Mushrooms are gaining popularity in the health and wellness world right now. Adaptogenic mushroom powders in particular, like reishi, cordyceps and chaga have become no stranger to wellness junkies. Baked into desserts, added to lattes, smoothies and even used topically or in skincare products, mushrooms are all the rage right now. Many of these mushrooms can also be consumed in fresh form, and are commonly found in Asian cuisine. A few of my personal favourite superfood mushrooms listed below, most of which originated from China and Japan. Maitake mushrooms may support healthy blood sugar levels. Fun fact, maitake translates to dancing mushroom from Japanese 🙂 So cute! Shiitake may be an anticancer ingredient, and also have tumor fighting properties. Reishi is considered an antibacterial, antiviral, anti-fungal, and anti-cancer fighting fungus! Cordyceps may protect against diabetes, support heart health and fight inflammation.

Miso is an ingredient I use a LOT in my cooking–primarily because it was a flavour I grew up on, and it’s delicious! The cherry on top is that it’s also a very healthy ingredient. Miso is a thick paste traditionally made from fermented soy beans (although soy alternatives now exist for those who cannot consume soy). It is rich in vitamins, minerals, enzymes and probiotics and has a naturally salty flavour. Try this Miso Mushroom Burger with Miso Tahini Sauce, Miso Butternut Squash Soup or these Maple Miso Glazed Carrots.
I thought I’d also spotlight the lesser known, Korean equivalent of miso–doenjjang 된장, too!

Seaweed is a great ingredient containing iodine, B-12 and iron, to name a few vitamins. You can consume seaweed in many ways like nori (typically used to wrap sushi), wakame, kombu or dulse. Seaweed and sea veggies have long been used in Japan specifically, and in Japanese cuisine, but may have originated in either China or Japan. Sea veggies have been named a trend by MindBodyGreen, but aside from just sushi, I have noticed the consumption of wakame and hijiki becoming increasingly popular.

Coconut is consumed in many forms–oil, meat, water and milk for example. It is likely that coconuts were first cultivated in Southeast Asia (like the Philippines) and bordering India (like Sri Lanka). It’s no doubt that coconuts are used frequently in Southeast Asian cooking, even in countries like Thailand, and there are a few reasons why coconut, in its many forms, is on my list. Coconut water is rich in electrolytes and incredible for hydration, while the oil can be used topically on the skin or ingested. Coconut oil can also be used for oil pulling, an Ayurvedic practice, and can also be used as a nourishing moisturizer. It is also said that coconut is a natural SPF (I mean don’t replace your sunblock with coconut oil though). Coconut meat is a rich, healthy fat, as is coconut milk/cream, which also makes for a wonderful dairy alternative.

Goji berries, also referred to as wolfberries, date back to Ancient Chinese times. While you may have been introduced to goji berries at your local smoothie and juice bar, or use it as a sweet topping, goji berries are used in traditional Chinese cooking in savoury dishes too. Actually, my first encounter with a goji berry was at my friend Lisa’s house, and she was enjoying them in a savoury soup dish. Goji berries are packed with vitamin C and zinc too! They may aid digestion, promote healthy skin and immunity too. In Chinese Medicine, goji berries are considered anti-aging, and beneficial for eye health.

9. K I M C H I
Ah Kimchi… I’m half Korean, and I’ll admit that I don’t like kimchi, but I’ve grown up hearing from my Korean grandparents just how good kimchi is for your health. Most people would assume that Kimchi originated in Korea, and while that seems to be the case, it’s interesting to note that Kimchi was traditionally made with Chinese cabbage (maybe just semantics? Idk, Asian history/relations especially between Korea/Japan/China were a mess). Kimchi is fermented and a source of gut friendly bacteria, which may aid digestion and a healthy gut. Kimchi is also very vitamin rich, and contains protective spices like garlic, ginger and chili.

Red dates, also known as jujubes, or hongzao are a highly regarded food in Traditional Chinese Medicine, known to support blood health and particularly good for womens’ health. They taste very different than medjool dates do, and are commonly used in savoury dishes in Chinese cuisine.

These are just a few Asian ingredients that came to mind, but there are so many wonderful herbs, spices and plants that Asian culture has to offer from a health perspective. The same could be said about most cultures actually and I always encourage exploration and appreciation of other cuisines. I hope this inspires you to try some new Asian ingredients if you haven’t already 🙂 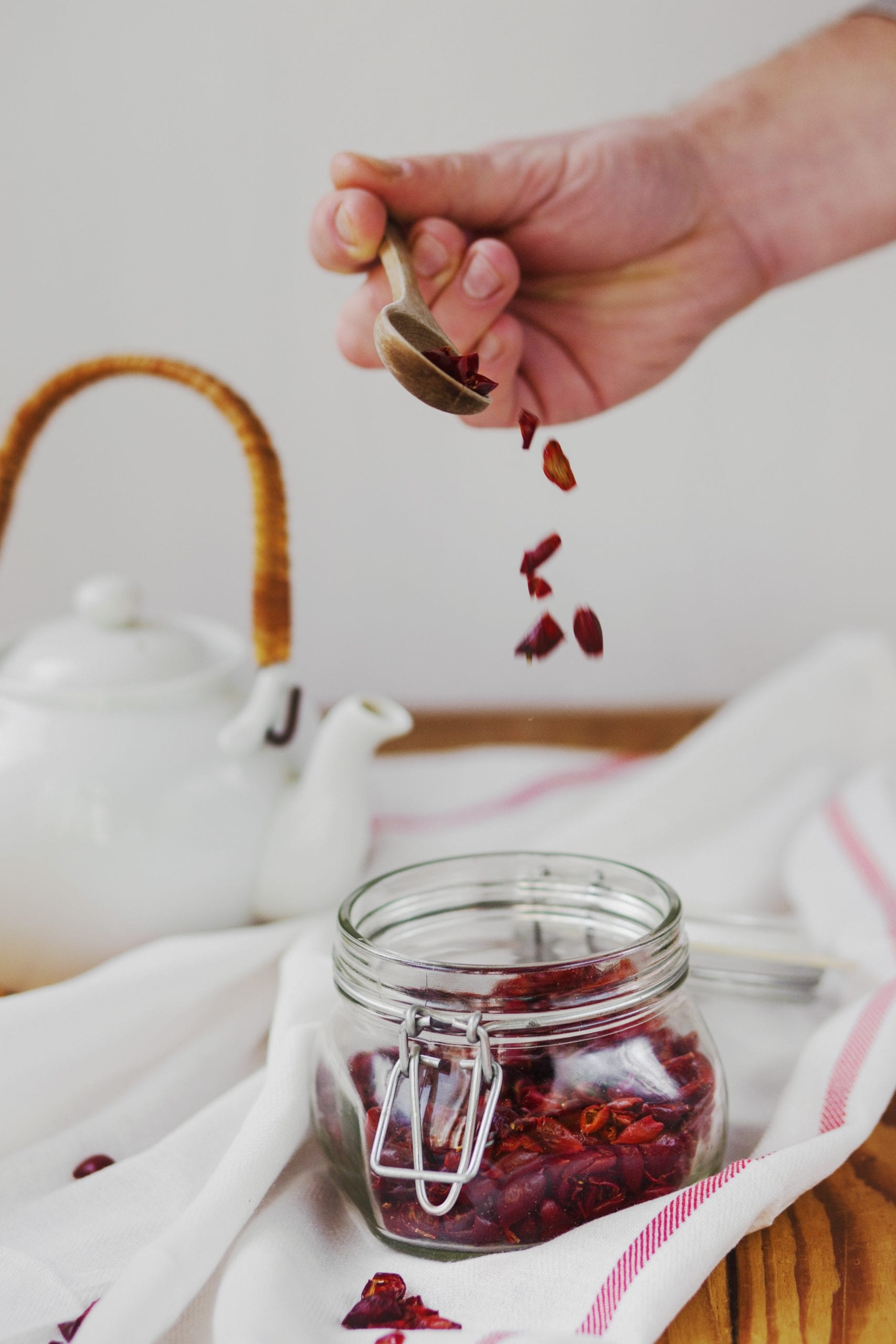