I wasn’t going to turn this bowl of oats into a recipe, but I thought, why not give pears a little love. I feel like they’re so under-appreciated, even though they’re incredible in the fall/winter seasons. At first, I was going to make poached pear boats, but then I got impatient while I was waiting for them to cook, so instead I decided to make a side of oatmeal. Then, my plan totally backfired because I thought, why not put my poached pears in my oatmeal? In other words, I ended up waiting even longer, but the result was this warming bowl of Poached Pear and Almond Oatmeal. 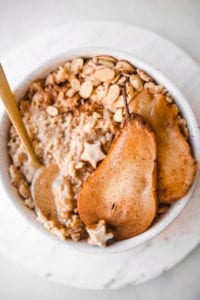 Cooked pears become really soft and delicious, which is a great texture to add to your oatmeal for extra flavour and sweetness. I like to slice half the pear and use it as a topping, while the other half of the pear is mixed into the oatmeal base. I browsed my kitchen pantry for some inspo because lately, I’ve been trying to create recipes from leftover ingredients that have been sitting unused.

I’m sure you can relate–you know that bag of obscure grains you picked up for ONE recipe that you never touched again? I’ve been doing pretty well lately using up ingredients, although I still do have about 1 cup of cornmeal left. I made Peanut Butter Cornmeal Cookies, which were delicious actually, and have plans to make Cornbread Waffles later today (stay tuned for that recipe!).

Back to why I brought up leftover ingredients… I saw sliced almonds that needed using up, so I toasted them in a similar fashion to my Pumpkin Spice Pecans. I just swapped pumpkin spice for cinnamon and lowered cook time. I threw them on top!

I thought, why not take it a little further and mix almond butter in. I always like to add a spoonful of some kind of nut butter to add to the creaminess of my oats, so what better nut butter than almond? And finally, I was inspired to add in a splash of almond extract that I picked up for a different recipe (coming soon). The result was an almond-cookie-esque oatmeal that peared (ha) perfectly with the baked pears. 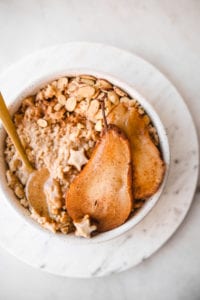 This has become my favourite way to cook lately–instead of browsing at shops for inspiration, I look in my own pantry. Admittedly, I have a TON of ingredients since well, this is my job, and it’s also cost effective, and a great way to make space in the kitchen.

You’ll notice that the oatmeal portion of this recipe is very similar to my Gingerbread Oatmeal recipe, because it’s my go-to proportion of ingredients to get my oats creamy and dreamy. That also means, it’s super easy to make! I recommend prepping the pears before you start cooking the oats, that way you can save yourself a little time. Oh and, prepare for your kitchen to smell amazing because it certainly will!

A cozy bowl of creamy oatmeal, with baked spiced pears, and an almond oatmeal base that tastes like an almond cookie! Vegan, gluten-free, refined sugar free and oil free. The perfect warming breakfast to start your day.

*I recommend using about 1 pear per serving! 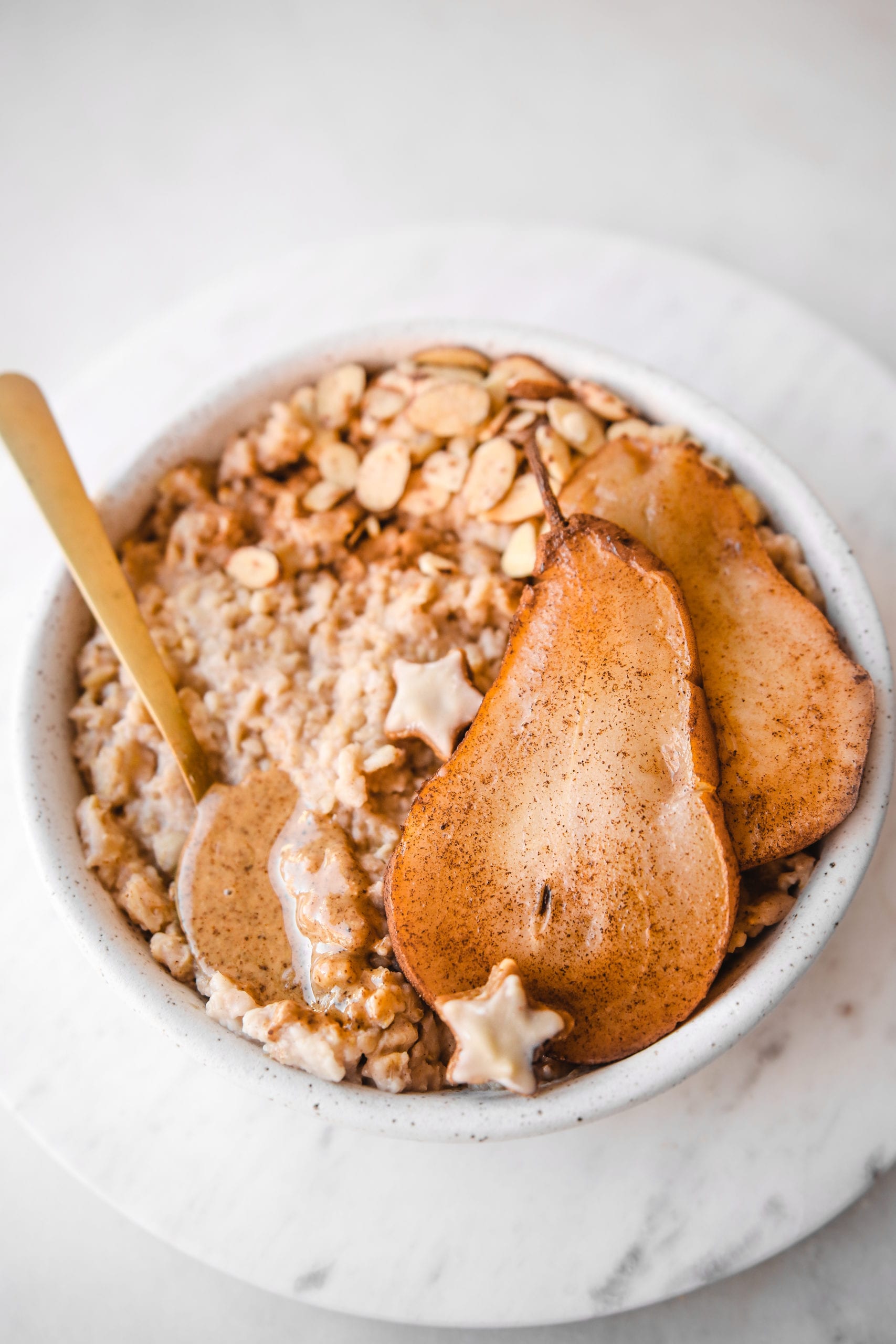