I had been sober for about 2 years when I felt the very familiar burn down my throat as I swallowed. I let the glass slip out of my hand and felt ice cubes rolling over the tops of my feet and shards of glass crunching underneath my high heels as I took a step backwards. I had played the power games with myself plenty before–deep inhalations of red wine, vodka, and even puttinh my lips on the edge of a bottle, but never let a drop of alcohol past my lips. This was different. I fucked up and the feeling was more than just mental or emotional. I could feel the tequila making it’s way down my throat and the heat building in my chest as it traveled. In the moment, the only thing I could think about was the work I had done to get to this place, and where to go from here.

I had just had alcohol.

Let me explain. We were at a margarita bar, and I had ordered my drink virgin, but in the midst of all the dancing and the not-so-sober state of those around me, cups had been moved around and I ended up with a not-so-virgin margarita. I knew from the moment I felt all the familiar feelings that I had made a terrible mistake and I started to imagine my body reacting to that sip of alcohol entering my body. I imagined a light turning on, telling addiction that it was welcome back into my life. I imagined my cheeks burning red the way they used to when I drank and my legs suddenly felt like they would no longer hold me up. I took myself outside, sat on the ground and fully broke down into tears. In hindsight, it probably didn’t look like an unusual scene at all. I was just another drunk girl who had had one too many drinks, crying on the sidewalk after reaching *that emotional point* of the night. In fact, that WAS my reality many nights before sobriety. I actually wish that had been the case because that feeling was much less painful in comparison, and I would have likely not remembered it ever happening by the next morning.

It might sound like no big deal that I had taken an accidental sip of alcohol. Shit happens right? But that one sip took a heavy toll on me mentally and put me on the verge of  completely unraveling. See, I was happy to play around with raising a glass to my lips because I was still in control and it was almost intoxicating knowing that I could be around alcohol, at clubs, lifting glasses to my nose just to smell. In a strange way, that was very reassuring to me. I had “recovered” but my relationship with sobriety was built on anxiety, and a deep need for control and power. The moment that was taken away from me, I felt like prey to addiction once again.

I didn’t sleep that night, and spent the following week withdrawn from friends and family as I weighed my options. For whatever reason, I had cultivated an internal dialogue around my entire journey and questioned what my next move would be. I reasoned. I rationalized. I told myself that I had already taken a sip, and I enjoyed the taste, and had honestly missed the feeling of the burn, so maybe I should let myself go. Maybe I should loosen up–after all, I woke up just fine the next morning. A drink or two every month might not hurt. Then, I would remind myself how much work I had put into the journey, how full of life I finally felt, and how proud of myself I had become. Not to mention my support system. Should I tell my parents? Should I tell my boyfriend? Would they be upset with me? Would I have to go back into daily counseling? Did I want to do that again? Did I need to give back my chips? What about the yoga classes on Thursday mornings that I really liked? Is it in my genes? They say biology plays a role in addiction. So is it out of my control? Should I allow myself a cigarette then? It’s not my fault I’m addicted. Should I text the dealer and see if he still lives here? I deleted his number. Damn it. Is beer really even that bad? I never even liked beer.

The voice was so loud and I felt lost because I couldn’t forgive myself for making a mistake. I was so disappointed in myself and I didn’t want to let anyone else down for the 200th time. While in recovery, you learn that reaching out and asking for help is your friend and I had no issue doing that. I could text my support system to let them know I was oddly having an urge to drink or use, or that I had encountered a trigger, but I was so convinced that having physically allowed alcohol into my system meant that I had invalidated the 2 years of uphill climb. What I failed to take into consideration was intention. Had my intention been to drink, there would be more reason for concern, but my intention and motivation to stay sober hadn’t changed.

I can’t believe this as I’m typing it out right now, but throwing myself back into substance and alcohol abuse was a move I was genuinely considering next. An accidental sip doesn’t mean you need to go back to square one, nor does it mean you need to revisit past behaviour, but I couldn’t see it that way at the time. My mindset was very much all or nothing but “recovery” is a journey and not a destination. It is natural to experience bumps in the road and to take a few steps backwards while on your way. I have experienced this with Anorexia recovery. I’ve had several weeks in a row during which I ate intuitively, without counting and measuring, only to be followed by a skipped meal. It was easy to fall back into restriction at that point because, “you might as well” and unfortunately, it’s quite common to respond to a relapse by then throwing in the towel. 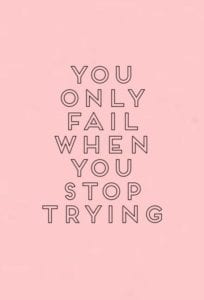 Here’s the thing about recovery of any kind: A relapse is a fresh start, but you still did the work to get to where you are. You are not going back to square one, you are simply in a new position and a new starting point. It’s as if you are running a race and need to stop to tie your shoe. You are not going to walk back to the starting line, but you may take a step back to re-tie your shoe before you get back on track. The goal doesn’t change and neither should your desire to get there. My friend Georgina shared an amazing analogy with me: If you are driving a car and you get a flat tire, it wouldn’t make sense to get out and slash the rest of the tires. Instead, the most natural and appropriate response would be to get help, find a solution and continue on your way.

As a woman on multiple healing and recovery journeys, what has helped me shift my mindset is to surrender. When we think about medical illnesses and disease, relapse is out of our control. Perhaps we need to let go of believing that we are not as much in control as we think and acknowledge that addiction too is a disease. So is a disorder. It’s not an excuse to stop doing the work and showing up, but if it happens, surrender to it and forgive yourself. Whatever journey you are on, remove the negative energy and time you spend fighting yourself when you fuck up, and make room to continue to grow instead.

What Happens When You F*ck Up | The Sobriety Series