Today is October 10th, World Mental Health Day, so I thought I’d share this week’s Sobriety Series post a little earlier than usual and I’ll also be sharing a yummy non-alcoholic Mint Melonade Slushie recipe with you in partnership with Suja. I’m beyond grateful to Suja for not only embracing, but supporting mental health and giving me the opportunity to share some of the not-so-pretty with you. I am a firm believer in the idea that sharing openly and honestly is a key component to better mental health so today I’ll be talking about my thoughts on something that has been on my mind lately: the concept of “healthy addictions” and the idea of replacing one addiction with another, or healthier alternatives. Don’t forget to look out for the the recipe at the end! 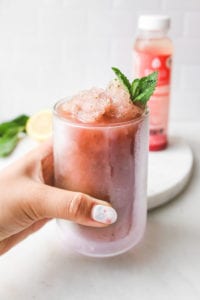 Something common people seem to say about addiction recovery is that recovered addicts need to replace their addiction with something else. It could be a new hobby, a different substance, taking up a challenge or working towards a goal (like marathon training, for example)–healthy addictions. I’ve even had friends who have compared it to getting over a breakup. In order to get over it, you “keep yourself busy” or see someone new.

Here’s the thing. That might be true to a degree, but I typically find that when people say this, it’s almost as if they’re implying that “once an addict, always an addict”. It can almost discredit new hobbies and lifestyle changes, as if the sole reason an addict takes interest in new things and changes is in order to suppress addiction. To be frank, it has never really been something that has been said to me with a positive intention. I think the issue lies in the word addiction itself. To an addict, and to most, addiction really comes with a negative connotation and if you’ve experienced it yourself firsthand, it likely isn’t a word that you use lightly.

There’s also the healthy addiction argument, which has been thrown at me here and there. I’ve been told that yoga, working out, veganism or social media are all healthier forms of addiction that I’ve taken on in place of my addiction to substances. Once in a while, I might joke that I’m now addicted to Suja’s Uber Greens Juice instead of vodka limes, or essential oil steams instead of cigarettes but there’s a big difference between being “addicted” to healthy beverages and holistic treatments and simply choosing healthy habits over addiction. Last month, I was listening to a podcast episode and the guest was talking about being addicted to things that allow us to function healthily and on a daily basis. The guest then mentioned that if everything that we did consistently was considered an addiction, then drinking water and breathing should also be considered addictions.

I would define addiction in the disordered sense as something that you become unable to function without and unable to withdraw from using. It also should be something that has a negative effect on your wellbeing, be it physical or mental. And finally, if you’re unable to get your fix or your hit, you’re not able to function and experience severe distress. So that said, you can obviously take any good thing to an extreme and turn it into an addiction if you really wanted to (anyone else watched that show My Strange Addiction?). For example, maybe you could become addicted to water if you’re drinking an unsafe amount and unable to stop, and you might do the same with green juice.

The point is that doing something to better your health or spend your time in a constructive way should never be called an addiction unless it is really taken to an extreme. At one point I was chain-smoking menthol cigarettes, and really didn’t feel myself if I wasn’t doing that. I’d feel jittery, anxious and on edge without them and similarly, I didn’t feel myself when I wasn’t drinking. In fact, I felt hypersensitive without alcohol there to dull sensations and emotions. On the flip side, I can function and don’t feel distressed in the slightest if I run out of lemons and don’t have lemon water one morning and I’ll survive without going to yoga for a day, or two, or even seven. If on the other hand, I had a breakdown every time I couldn’t have a green juice when I wanted to, or wasn’t able to start my day without a glass of lemon water, that would be another conversation. 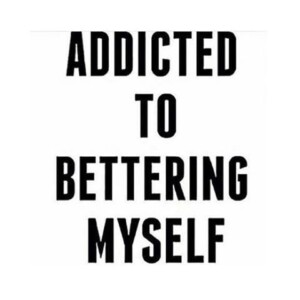 When an addict chooses recovery, it is absolutely a lifestyle change. Abstinence is only a part of it because as an addict, your life and your habits revolve around whatever your addiction is. That means you will most certainly start spending your time in other ways, and with that new time you may take up some new hobbies and adopt healthier habits into your lifestyle. Think of it almost like a job. Actually, that’s a pretty decent comparison. You can think of addiction almost like a job because it really takes up a significant percentage (if not the majority of) your life and energy and effort. So maybe we can compare recovery to retiring, or leaving a job. Stick with me through this analogy, we’re almost done here… Once you leave your job or retire, you now have a lot more free time and that might translate into exploring new hobbies you never had time for previously. What else are you going to do with that free time? Maybe it’s spending more time with family, maybe it’s learning to rock climb, or starting up a blog even.

New hobbies and a lifestyle change are essential to recovery, because addiction was the lifestyle. Now, healthy habits and lifestyle change are my way of showing myself care. See, I remember that in high school and my early college years, all my hobbies revolved around substances. I liked music festivals because there were psychedelics involved, clubs because drinks were involved, brunch because it involved mimosas and champagne and even alone time because I needed that time to myself for the comedowns. Once my lifestyle changed, my hobbies did too. If anything, recovery freed me so much so that I became able to explore other avenues of myself and my interests. I was no longer chained to rituals and routines that revolved around making sure I could secure what I needed as an addict and I had time to show myself love and take care of myself. Self-care could mean learning to cook for yourself and making healthier meals, drinking a green juice, going to yoga class or making yourself a delicious Mint Melonade Slushie. Invest time into things that lift you up, better your health and make you feel well.

I hope you enjoyed my thoughts on this topic, and I would love to hear your thoughts in the comments. 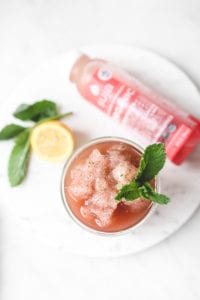 Now, for the Mint Melonade Slushie recipe! This blender recipe is so simple, and made with Suja’s Watermelon Probiotic Juice. It contains only watermelon, lemon, lime and 2 billion CFUs of vegan probiotics. I added a little mint and additional lemon, and blended with ice so make a slushie that tastes good and is good for you too.

*You can also freeze the probiotic juice to make ice cubes so that when it melts, you won’t lose any flavour or end up with a diluted drink. 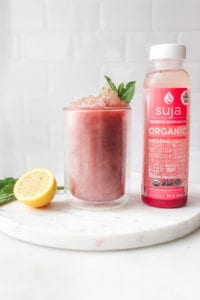 Big thank you to Suja for sponsoring today’s blogpost. It really makes my heart full working with brands that aren’t afraid to support and champion real issues. 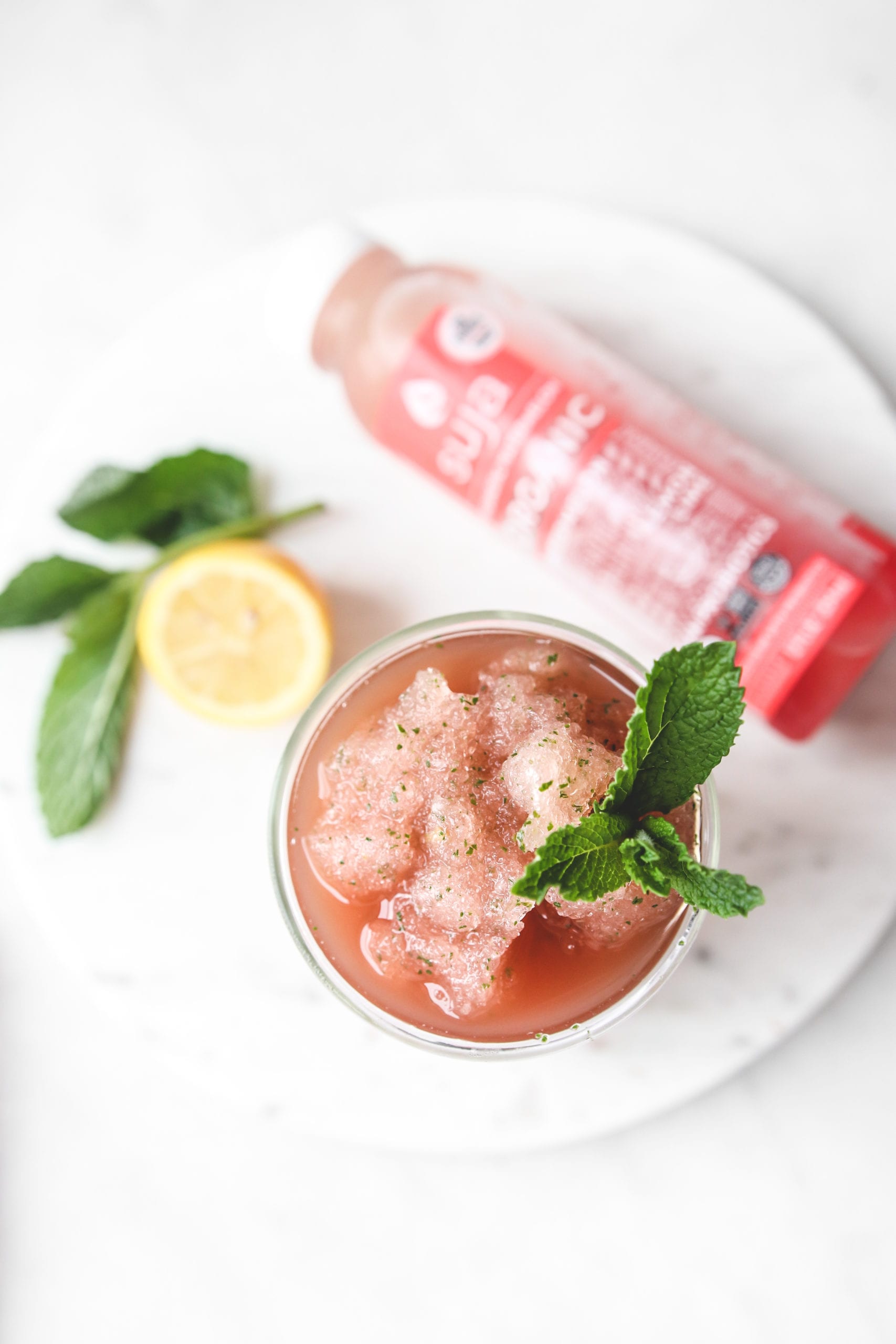 What Happens When You F*ck Up | The Sobriety Series »