Indulge me. I know this sandwich is extra and I debated sharing this at all BUT I decided to share it in case you weren’t aware that there were other ways to add adaptogens to your diet outside of drinking them in your lattes and smoothies. You may have seen adaptogens in some of my existing recipes because they can also be used in baked goods, meals and even savoury food. 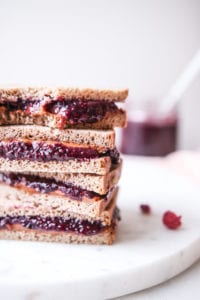 In a nutshell, adaptogens are herbs and plants that aid your body in coping with stress by supporting and regulating your hormones. They include a host of mushrooms and herbs that have different effects on the body like boosting energy, promoting calm and even boosting immunity. You’ve probably seen them in smoothie and latte concoctions and perhaps even a few desserts and small bites but full disclosure, I don’t always feel like having a latte or a smoothie. Instead, I love cooking with adaptogens because of their health benefits, but also because several of them actually have a really lovely taste.

Personally my 3 favourite adaptogens for sweet recipes are Maca, which has a butterscotch/caramelly flavour, Lucuma, which tastes like maple, and Mesquite, which has a nutty, malty flavour. Most adaptogens actually don’t have much of a flavour at all. Some of the mushrooms can also be consumed as whole mushrooms, like Lion’s Mane, for example, and in powder form, these adaptogens may have a bit more of an earthy, woody flavour. They actually pair really well with savoury mushroom dishes. Try it sprinkled over sauteed mushrooms, or in a curry or soup!

I’ve done a lot of research on whether or not adaptogens lose their potency when cooked past a certain high temperature, and didn’t find too many answers. I’m no expert, but my assumption is that it’s similar to miso, where you’re better off adding it in at the end or on medium heat versus high high temps so that’s how I like to use them. If I’m cooking a warm dish, I’ll add it right at the end before serving but now I’m getting off topic–with this recipe you don’t have to worry about that.

So how did this over the top PB&J come to life? I was feeling like I was about to get sick, but I also was craving a PB&J as I was writing up a blogpost about my favourite vegan and gluten free bread brands. So instead of a latte, I thought I’d just adaptogen-spike my sandwich. I also added some toasted nuts for crunch, and freeze dried berries for more flavour because why not? I don’t know if I could even call this a recipe, but here it is: 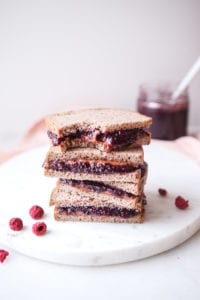 You know what to do here. Toast your bread, mix your adaptogens into either your nut butter or your jam OR just sprinkle in your sandwich. Toss in some toasted nuts and freeze dried strawberries if you like, and enjoy 🙂

If you try this recipe out, share it with me by tagging me on Instagram @veggiekins + using the hashtag #veggiekins.